…or “Short(bread) Circuit” because technically these are supposed to be shortbread. However, I’m incredibly incredibly picky with what I deem shortbread, so, not sure really if it’s an appropriate title in this case, but I don’t care because honestly? In the words of Ned Flanders, they tasted rather scrum-diddly-umptious and I would totally make them again. I accidentally overbaked them a bit, so that’s probably the main reason I find it difficult to call them shortbread. I didn’t even listen to my own instructions on how long I should keep them in the oven. However, if this happens to you, don’t despair! The resulting ever so slightly crunchy cookie was in absolutely no way disappointing (and dare I say better? Scandalous, but I think I do). If you are also desiring slightly crunchy cookies (but on purpose!), just roll the cookies slightly thinner and bake for about 5 minutes or so longer than I recommend below and you’ll be all set. I’m going to tell myself that my error was on par with Alexander Fleming’s accidental discovery of penicillin (fun factoid – he initially named pencillin “mould juice”. I truly cannot comprehend how that name wasn’t adopted). That’s a totally fair comparison right? 😉 )

In an effort to cover a myriad of perceived sins due to “overbaking” these, after taking my first few photos, I opted to dust them with icing sugar, so that all that your eye will perceive prior to consumption is some sweet sweet cookie goodness. Although it’s obviously no longer Christmas, I thought it made these look super seasonal. Which, as it is still winter, I suppose could still be considered fitting (although I hate being reminded of snow generally speaking, I suppose I can make an exception for snow made of icing sugar 😉 ).

See? Don’t they look prettier now? All dressed up in their wedding whites…or something else romantic and clever? Whatever, stop judging and just eat them 😉 .

So, in addition to being “shortbready” (which is obviously way too boring an undertaking for me. What do you mean make a cookie with only 3 or 4 ingredients? Blasphemy. “How can we complicate this up?” I asked myself. Well, I love cranberries, and cranberries go great with almonds. Also, I love soaking things in alcohol, so lets take some dried cranberries, soak them in a mix of amaretto and crème de cacao, mix those as well as some chopped almonds for texture and taste into your batter and you’ve got yourself a cookie. Oh, and you know what else goes with cranberries? Orange. So why not zest a little of that flavour in as well. And what goes with orange? If my good friend Terry (of chocolate orange fame. Oh childhood nostalgia) knows what he’s doing (which I like to think he does after almost a century of successful sales. Fun side note – Terry’s first orb-like fruit flavoured chocolate was actually a chocolate apple: 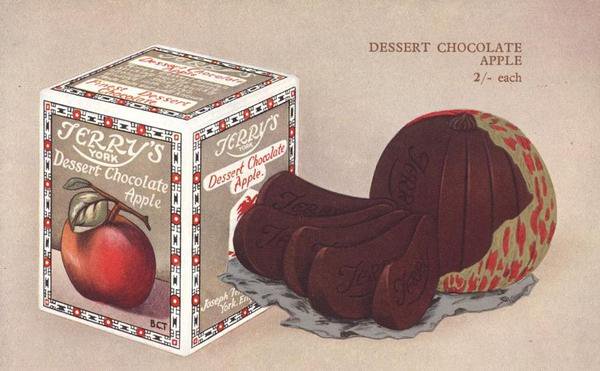 So bring it on – brew yourself up a delicious cup of tea or coffee, and make it a million times better by having it alongside these cookies.

Strut Your (Peanut Butter) Stuff(ing) »
« Planet Of The Grapes